Let me tell you a story here (which Prof. David Patterson shared at VSDOpen2018) 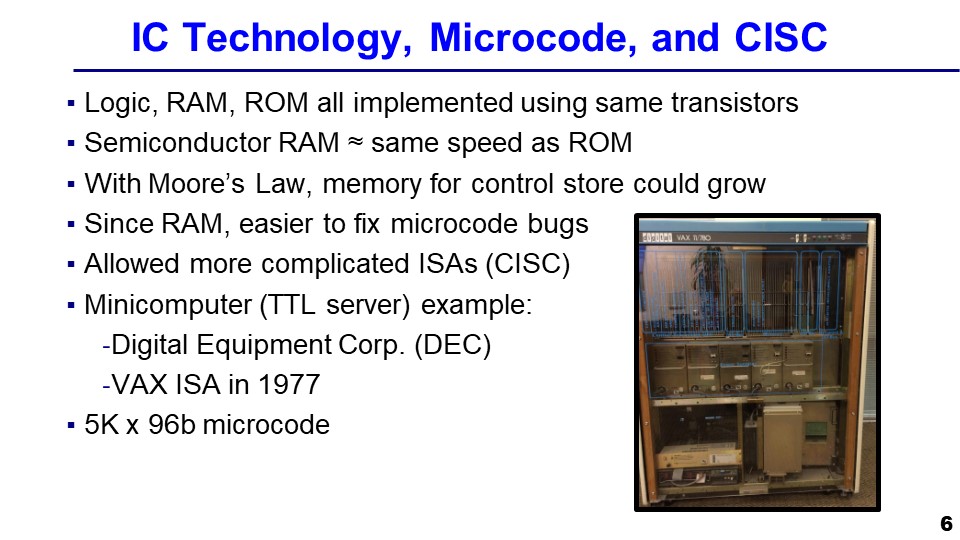 Logic, RAM and ROM are built using same transistors, they are all about same speed and RAM is as same speed as ROM. And because its integrated circuits, Moore’s law applies, which means we can grow. That means the RAM is bigger, so we can have bigger micro-programs, which are basically interpreters of instruction sets. The kind of classic example is the VAX architecture which has a lot of micro-code in it and a great competent instruction set 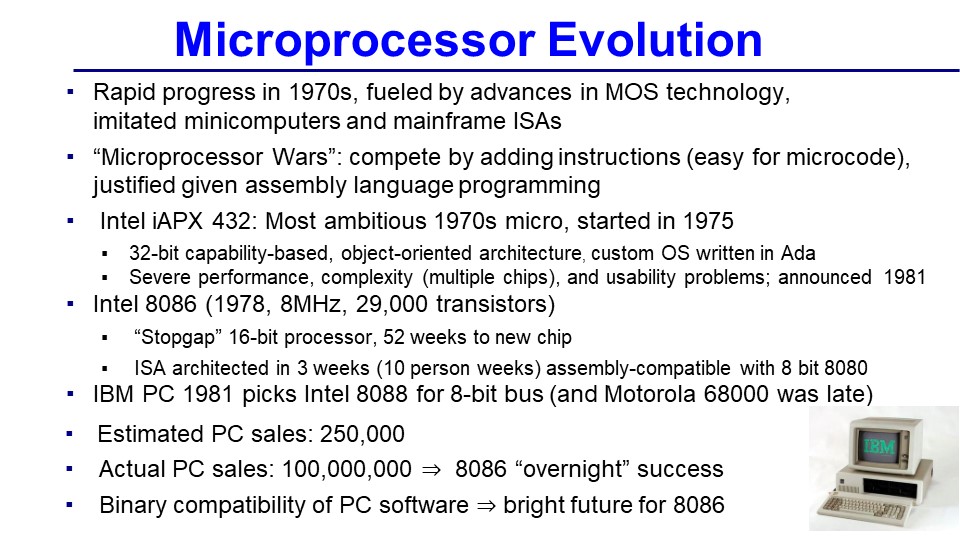 Now the microprocessor people at that time really didn’t understand computer architecture, so what they did is basically imitated minicomputers and mainframes. The way they would integrate (because people were programming in assembly language) is they would add new instructions which was easy to do in micro-code. They would add some special instructions and write it in assembly language. Example, one was better, and another company would do another one.

So, Gordon Moore, at that time, with Moore’s law being famous, was certainly a visionary. This is back in 1970’s, the next instruction set architecture they did was going to last the lifetime of the company. He hired a bunch of PhD’s in computer science, sent them to Portland, Oregon from Northern California with the goal of embedding the next instruction set that lasts the lifetime of the company

That instruction set was called iAPX 432 and was certainly the most ambitious microprocessor project of 1970’s. It started in 1975. The ideas included were, going from 8-bit to a 32-bit address that was capability-based addressing, so very secure system, so-called object-oriented architecture. Then they had operating system which was written custom to them in Ada.

It was very ambitious, but it was also very late. It was very complicated. It didn’t fit on chips and so they had to go back to Gordon Moore and said, we are not going to have it ready on time. So, Intel was forced to start an emergency project called 8086 and they gave them 52 weeks for this small design to do everything like, the instruction set, a chip, software and have it ready to go in 52 weeks. That gave them only 3 weeks to work on ISA for 3 people so 10-person weeks total. They basically extended 8-bit 8080

Then it was announced that they did it on schedule, and to their great fortune, IBM needed a microprocessor for their IBM PC, they were getting into the market to compete with Apple. It wasn’t that bigger deal for Intel to win that, IBM first wanted to do Motorola, but it was late

It wasn’t that bigger deal for Intel because they thought, at the time, it will be 250,000 chips will be sold for 5 years, which isn’t that many. But they were wrong. It was a 100Million computers were sold. And suddenly 8086 from being an emergency back-up was an over-night success and had a very bright future, because it was binary compatible of PC software, and so had great opportunity

Isn’t that an inspiring story?

Wait for next part of this “Golden Age of Computer Architecture”