Notice, we have 3 capacitances and 3 resistances on the net. So the way to represent them is in below image. The numbers “121”, “122”, etc. are the line numbers, *2:1, *2:2…. are the respective capacitances. I will get back on *2 and *1 and the beginning and end of the cap section. Broadly, this is to denote the start and end section of *CAP Now, we have 4 nodes, and within a pair of node, we have a resistance, like below

With the introduction of nodes, the representation of resistance has now become fairly simple, like below 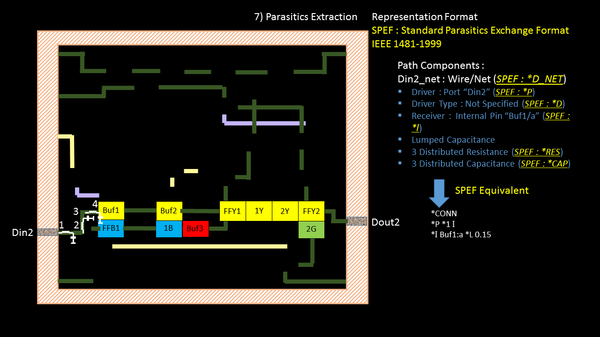 These set of lines for distributed resistance and capacitance, will become a part of the SPEF file, we were maintaining. So let;s add it there These couple of lines (about 20), now represents a small net and a port. Just imagine, how many lines it will be to extract parasitics for the complete circuit, below. Its HUGE. I think, now we nail the reason for having *NAME_MAP. The SPEF file size greatly reduces, by name mapping. A 10 character net or port name can be reduced to a 2~3 character net name and can be referred and reused in the whole SPEF file. These people are really Smart 🙂

Remember, I had mentioned, I will get back on units. So here we go. We have a header file that defines all of the them. Firstly, the design name, vendor name, version, etc. Then, the delimiter. Usually, in any report, we see, it as “/”. In SPEF you can have your own delimiter, by defining something like below And the units, and power nets Below is the SPEF file, for one net and one port So, next time, when you look at the SPEF, just make sure to open it, and see, if what we discussed in all SPEF format posts, does make sense.

And, In Lady Windemere’s Fan, Oscar Wilde had Lord Darlington quip that a cynic was ‘a man who knows the price of everything and the value of nothing.‘